Welcome to the UCCS Ozone Garden!

The UCCS ozone garden is a Green Action Funded (GAF) project that was established in 2016 at the Sustainability Demonstration House. Our ozone garden consists of four different bioindicator plants that help us identify the cleanliness of our air. There are several ozone gardens scattered across the U.S. and their purpose is to measure and collect air quality data in any given area. With this data, we can begin to determine whether or not there is a particular type of pollutant called tropospheric ozone (ground-level ozone) circulating the air we breathe and begin to find solutions.

Although ozone is invisible, its effects can be observed on the leaves of certain plants. Ozone sensitive plants develop symptoms on their leaves that we can see, telling us when high levels of ozone are present in the air around us. Because they provide this information, they are called bioindicator plants.

For further assistance or a guided tour, we encourage you to contact the office ahead of time at sustain@uccs.edu.

Program Background Information
Learn more about why we have an ozone garden through the following questions.
UCCS Data Collections
Ozone Internship

8 AUG 2017
Welcome to UCCS's Ozone Garden, located in front of the Sustainability Demonstration House. This is a student-run, Green Action Funded project that collects data for the National Center for Atmospheric Research (NCAR) in Boulder, CO. NCAR is collecting data from multiple sites across Colorado to measure the effects of ground-level ozone on plant life. 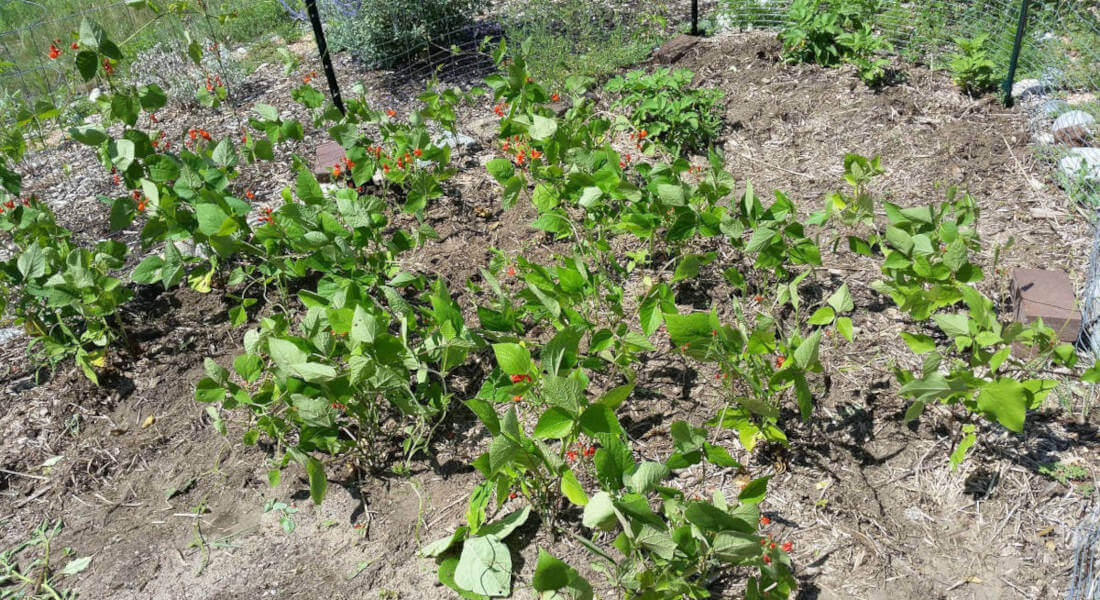 Look for weekly updates on the garden, and feel free to come up for a visit and to collect your own data!

14 AUG 2017
Hello Ozone Garden Followers! I didn't have much to do in the garden today. A little bit of weeding, which I always have to do. The longer I leave it, the more weeds there are to pull! One of my coneflower plants no longer has blooms. Nothing unnatural about that, as they bloom in midsummer. I am cutting off dead flowers to extend the blooming season. The leaves are showing quite a bit of damage: There is some significant ozone damage (0.8 rating) and some yellowing of the leaves. This plant shows damage in brown spots that don't cross vein lines. As you can see in this picture, this leaf has a few types of damage. There's the browning at the edge of the leaves, most likely caused by a fungus called Sclerotinia sclerotiorum (www.hortmag.com/weekly-tips/dyingconeflowers). Coneflowers don't require a lot of water, and we've had more rain than usual this summer. There's also the yellowing of the leaves, also at the edges, most likely caused by overwatering. The spots are either ozone damage or the fungus, most likely both. 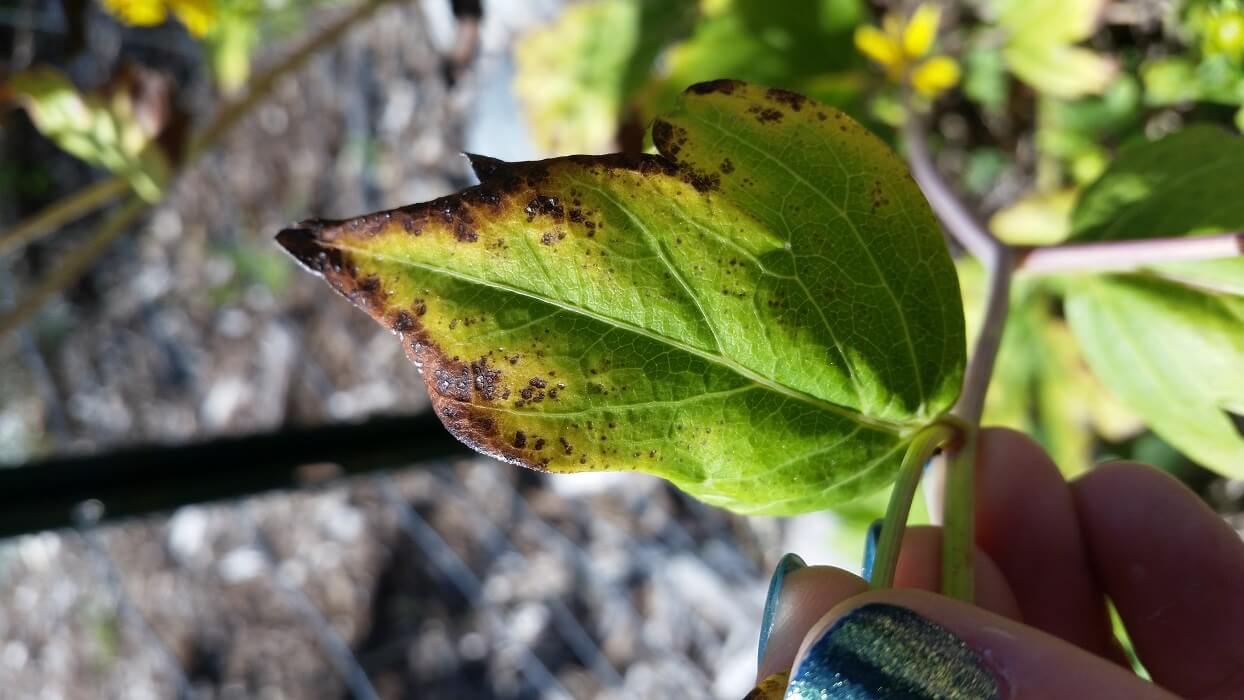 I still have only two common milkweed plants. You would think that, it being a WEED it would be at least a little more prolific. Well, I'm working with what I've got. It is showing some damage (0.6 rating), but not a whole lot. What I am looking at specifically is the little light green specks on the leaves. You can tell they're ozone damage and not bug damage because the specks are separate and don't cross vein lines. 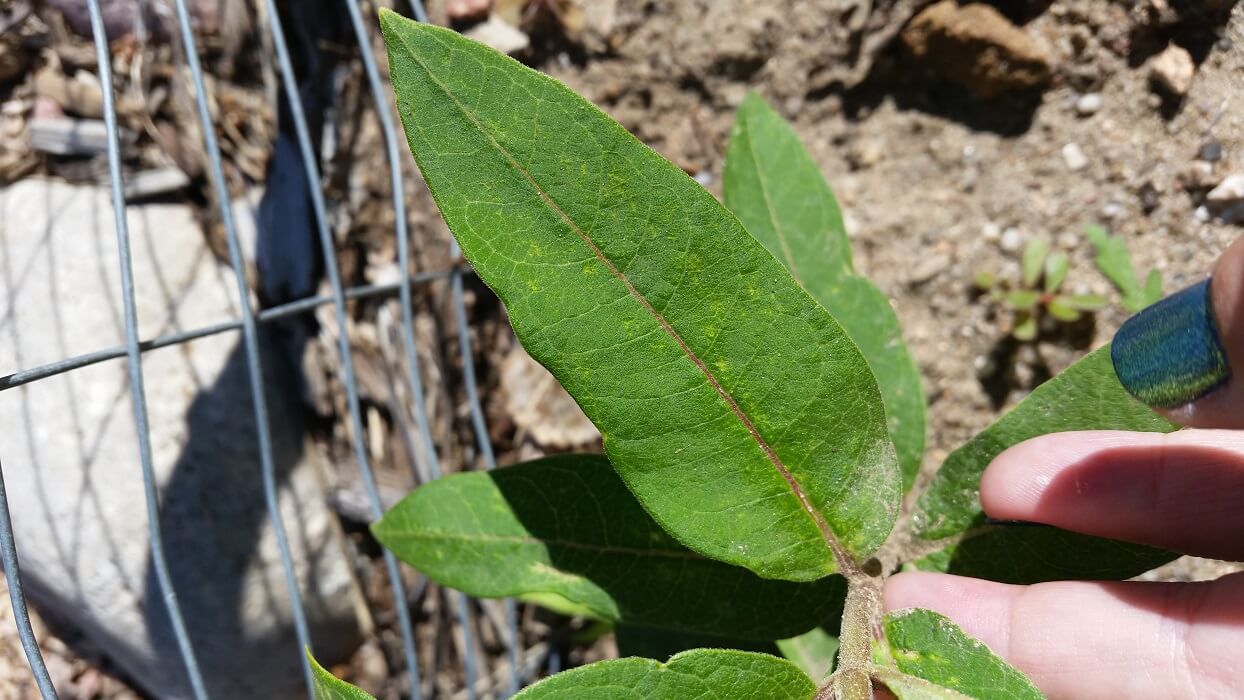 On the other side of the garden, the beans are doing very well. They still have red blossoms which are attracting hummingbirds. I have not seen any little beans sprouting yet.  There is a little bit of ozone damage (0.5 rating), about like what the milkweed has. Again, I'm looking at the small light green spots that don't cross vein lines. 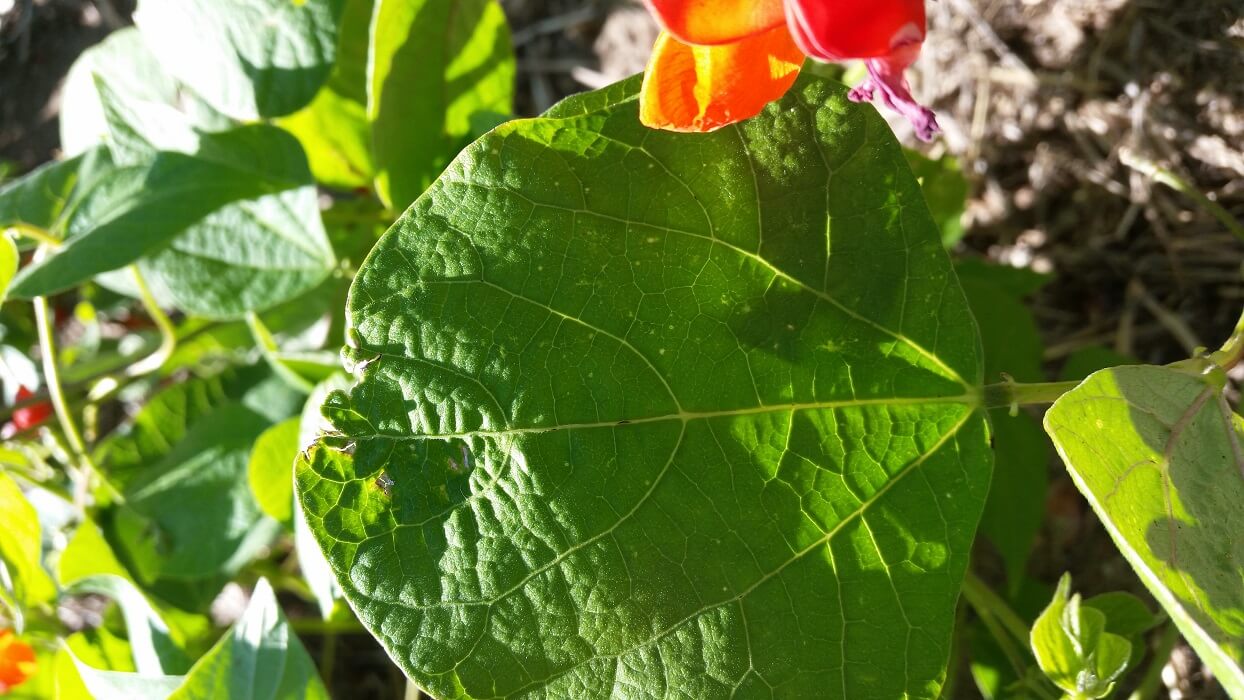 And, finally, there's the potatoes. Of all the plants in this garden, they are in second place for the amount of general damage visible (0.8 rating). What you are seeing in this picture is the brown spots, again, not crossing the vein lines. In potato plants, they are brown, like the coneflowers. There's also bug damage, as evidenced by the holes in the leaves. Ozone damage does not cause holes. I guess the bugs really like those particular leaves. Most likely it is caterpillars, because the leaves are being eaten from the inside out, not from the edges in (potato_pests.pdf). Of course, I do not see any potatoes, as they are all under the soil. Hopefully they're doing just fine. 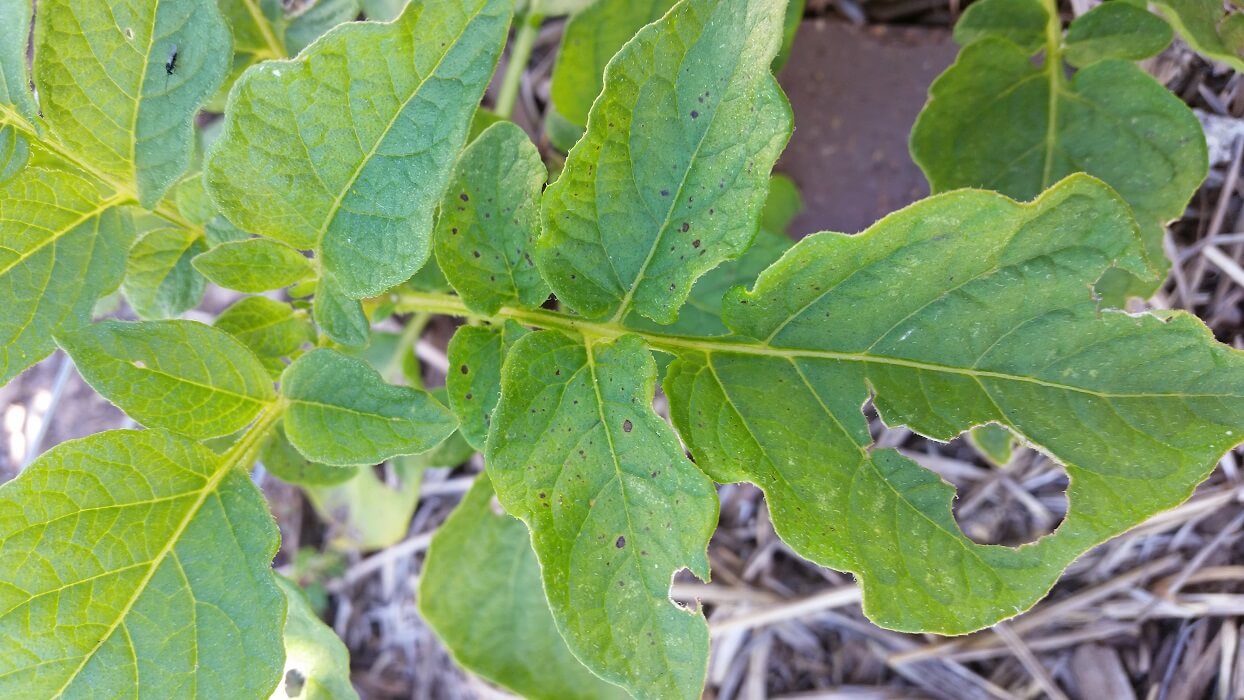 Two is 30-60%. Only the coneflower is showing this much damage or more.

Three is 60-90%. A few of the coneflower leaves are showing this much damage.

A rating of four is 90% of the leaf or more. Not one of my plants are showing this much damage!

Now, what exactly does this all mean? I've mentioned before that the stippling is a dead stoma (and if I haven't, well, there it is!). The stoma is how a plant breathes, exhaling water vapor and inhaling CO2. When a stoma dies, the plant is less able to breath, like a smoker's lungs. The more stoma that die, the harder it is for the plant to breath. It stunts growth and may even kill a plant.

Consider that two of the plants in UCCS's garden are crop plants: beans and potatoes. Two of my potato plants died this week, and I only had eight to begin with. They also haven't been doing all that great all season. Fortunately, I am not depending on these plants to feed me and my family. But if I was, that's a 25% loss of a food crop that isn't doing too well. That could mean starvation for my family later, or a loss of funds because I must buy more food. In an article from the American Geophysical Union (http://news.agu.org/press-release/ozone-pollution-in-india-kills-enough-crops-to-feed-94-million-in-poverty/), ozone pollution killed enough food crops to feed 94 million people (Ghude, et. al., 2014). That's a lot of crops in an area that's difficult to grow enough as it is. Ozone damage is a problem around the world, and we don't know how to fix it yet. Which is why I am collecting this data. The more information we can gather, the better we can understand the problem and learn how to fix or prevent further damage.     Ghude, S. D., Jena, C., Chate, D. M., Beig, G., Pfister, G. G., Kumar, R., & Ramanathan, V. (2014). Ozone Pollution in India Kills Enough Crops to Feed 94 Million in Poverty. American Geophysical Union. Retrieved from: http://news.agu.org/press-release/ozone-pollution-in-india-kills-enough-crops-to-feed-94-million-in-poverty/.

5 SEPT 2017
General update for the ozone garden:
The potatoes are dying off. As of today, I only have two plants left. Last week, I had eight. However, it did produce a lovely harvest! I've got quite a few potatoes along with my beans. The bean harvest is starting to taper off. I probably go about half the amount of beans I harvested last week. 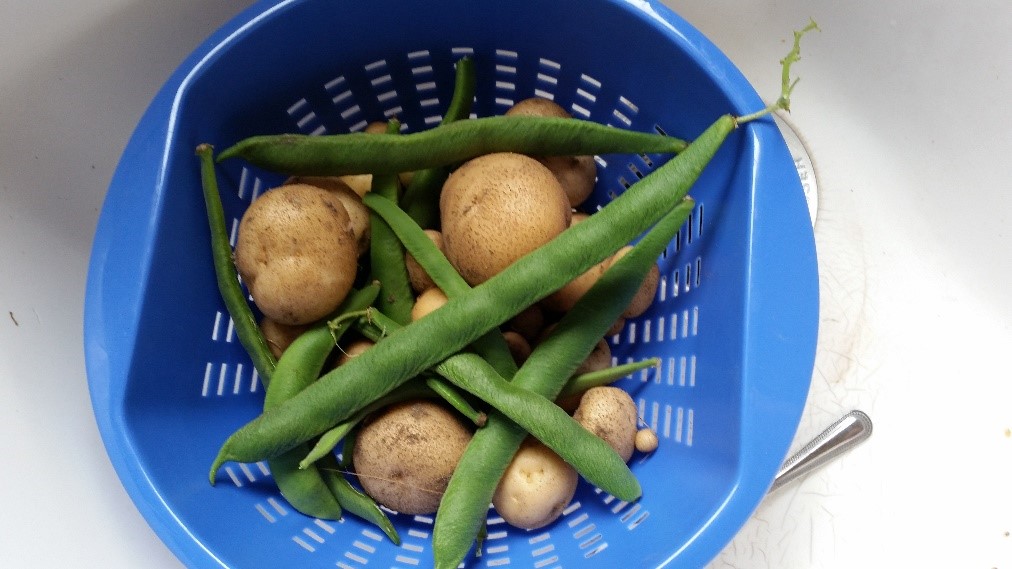 The coneflower plant is also dying. Hopefully, I can nurse it along as long as possible. Might only get a couple more weeks out of the coneflower and potatoes.
The beans and milkweed, however, are doing beautifully! They've got nice, big, green leaves, perfect for data collection.

Coneflower and potato plants did not survive and will need to be replanted next season for collection. Milkweed, Snap bean, and newly planted Raspberry plants are giving signs of ozone indication.