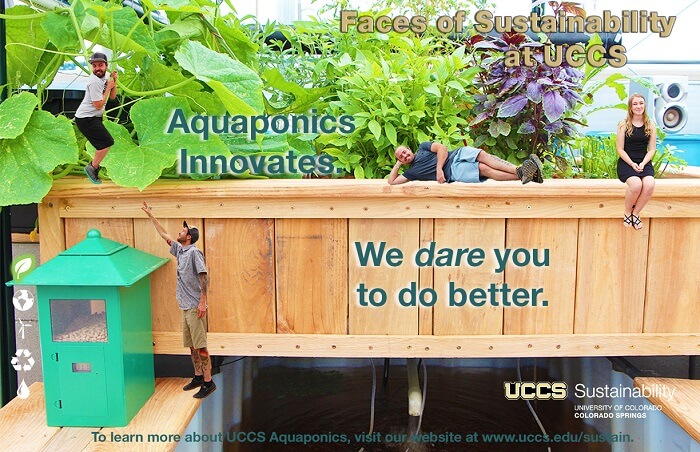 The UCCS Aquaponics system combines aquaculture, commonly referred to as fish-farming, with two different hydroponic production techniques.  The two different methods of food production are united through beneficial bacteria that convert the fish waste into nitrates and other nutrients which are readily absorbed by the hydroponically grown plants.  The UCCS aquaponics system has integrated different techniques with the purpose of maximizing the volume of space that it occupies within the UCCS Greenhouse.  The system utilizes a 3'x 4' grow bed full of hydroponic growing media as well as two different ten foot sections of hydroponic growing tubes which are suspended directly above the bed; making the most of the available space by growing vertically rather than just horizontally.  The system also produces duckweed, which is a nutrient-rich supplement to the fish diet.  A major benefit of aquaponics technology is minimal water usage in comparison to traditional agriculture.  Unlike hydroponics, aquaponics maintains the same water indefinitely, the only water-loss is through transpiration and evaporation.  The UCCS Aquaponics system takes advantage of biodiversity within the system as a means to generate mutually beneficial solutions.  Red wiggler worms are cultivated within the grow bed in order to break down fish waste caught in the hydroponic media, resulting in a large colony of worms which can be fed to the fish.  Aquatic snails have been populated throughout the system which also aid in reducing the build-up of solid waste in the hydroponic grow tubes.  After two months of production the UCCS aquaponics system has already experienced great success.

Why/how did you get involved with aquaponics?

Austin: I was introduced to Erik and aquaponics while volunteering for the greenhouse. I was wanting to do a project where I could incorporate environmental monitoring into the greenhouse in order to improve the overall growing conditions of the greenhouse. When Erik introduced to me to aquaponics, I was excited to be able to incorporate some environmental monitoring, but for a living system. I was intrigued by the idea of aquaponics because it closely replicates a natural cycle, and more sustainable then a nature-like cycle that produces food. The need to monitor the system comes from the idea of "You can't manage what you don't measure".  It important that we have large amounts of data to look at when trying to diagnose problems and manage this system over a long period of time. Having the ability to automatically take measurements and record data makes this process so much easier, and reduces the manpower needed to keep the system up and running. Using an Arduino and open source programming makes the possibilities of the monitoring system endless. If you can think it, you can probably make it. I hope to use this small system as a guide to expand to a large commercial size system to supply all of the fresh greens for our campus.

Justin: My interest in aquaponics started with the aquarium hobby. I have been involved with keeping aquariums, specifically freshwater planted aquariums for several years. I read an article in the newspaper about aquaponics and how it models ecosystems in order to produce fresh fish and vegetables. I was interested because I model my fish tanks in a similar fashion and decided to make a small home system myself. Aquaponics has a lot of variables in the system as would any different ecosystem and I find it challenging to learn, design, and grow the most efficient system I can. The technique of growing vegetables and fish through an aquaponics system has many benefits and will undoubtedly become a major way to sustain food and fish farming, especially in densely populated urban areas.

Calli: I joined the aquaponics team after Erik reached out to me asking if I would be interested. I love doing research so I looked into it and saw a vast opportunity for learning and helping provide resources for our community. It's very exciting to know that our harvest go towards the campus dining facilities and then eat there and know we help contribute.